Aptly named for the ancient Greek and Latin word for “star”, asters are indeed a star of the mid to late autumn garden, coming into their own as other garden perennials are starting to fade and slow down.

With over 600 species in the Aster genus there is a vast array of both species and garden cultivars and also colours, which range through pink, purple, red, blue and white and all variants of those colours too.  There is little to compete with a mass of Asters in flower, possibly as much because of their beauty as because of the surprise that one can get on coming across such beautiful flowers so late in the season.

For this piece I will concentrate on the better known, and more readily available varieties, as well as a few choice rarities.  However, it should be noted that as with many in the plant world many Asters have been renamed as “Symphyotrichum”.

For all the varieties mentioned in this article sun if the most essential requirement and, apart from A. amellus there is little tolerance of drought.  However whilst most will grow in various conditions of fertility, the richer the soil the taller and more lax the growth will be.

The most prolific species for the early 20th Century breeders was the S. novi-belgii, commonly known as New York Asters, or Michelmas daisies.  This species still dominates the selection available, with over 1000 named varieties, and with the greatest range of colours.  Best planted in open, sunny positions they do have significant flaws in that they can need support, are prone to mildew and can deteriorate after a number of years.  However, all those flaws can be dealt with!  The need for staking or support can be reduced by pinching out or cutting back new shoots in July.  As well as reducing the height such pruning will delay flowering and indeed will encourage more flowers on the plant.  Another option is to simply cut the plants back once in early June by about half or two thirds when the plants are between 30 and 60cm in height.

The mildew problem can be dealt with by ensuring that the plant has plenty of water, especially during dry summers.  Thinning is also recommended as this will improve the air circulation around the stems, so reducing foliar disease.

A lot less demanding and more resilient is the species S. novae-angliae, commonly known as the New England Aster.  The colour range was not always as broad as that of S. novi-belgii but recent breeding has changed all that giving us as wide a range as S. novi- belgii.  Some outstanding varieties are “Barr’s Blue”, “Andeken an Alma Potschke” – AGM, with its cerise pink flowers, “Helen Picton” – AGM, with deep purple flowers and a favourite of ours “Marina Wolkonsky” which has deep violet blue flowers.  These New Englanders are not prone to mildew and produce masses of small daisy-like flowers which are a great source of late season food for bees and butterflies.

S. amellus is different to the previous two species in that it prefers a dry soil and doesn’t like winter wet.  They are known as the European Michelmas Daisy.  It is one of the first to come into flower, often starting to flower in late July and has a neat and compact habit.  One of the best forms of S. amellus is “Blue King” which has large heads of violet blue flowers .  S. amellus is part of the parentage of one of the best known Asters, S x frikartii “Monch” with its vivid lilac flowers.  However, from our experience we find another of “Monch’s” parents – S thompsonii – to be a far superior plant.  It has the same vivid lilac flowers but is a sturdier plant even though it is slightly taller.

Another very well known variety, and indeed possibly the best know is S. “Little Carlow” which will grown to 1.2m in height and over the years achieves 1m in width too. However we have found that it does need support or else one runs the risk of having it smother its neighbours!

One final variety which we came across for the first time last year is S. “Vesterival” which has stunning black stems topped by pinkish lilac flowers which fade to almost white.  At 90cm in heigh we found it to be magnificent.

We would always say that no matter the size of one’s garden some space should always be made for a member or two of the Aster family – sorry “Symphyotrichum” family!! 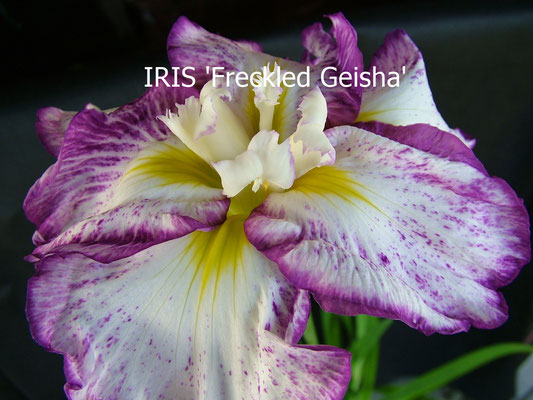 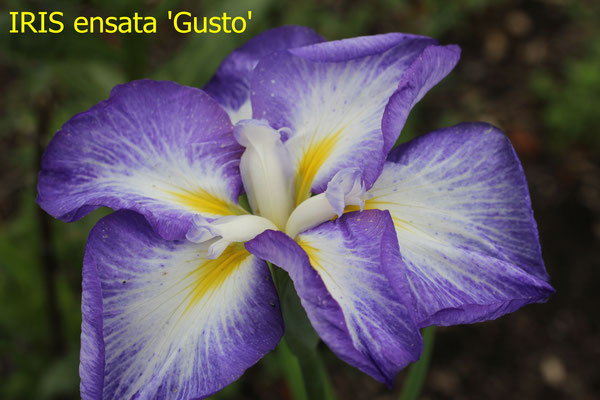 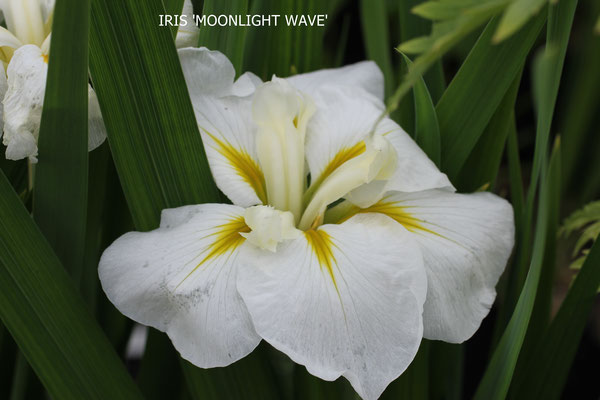 Of all the herbaceous plants that one grows in the garden the Tall Bearded Iris Germanica are probably the most recognised, famous or indeed iconic.  Yet of all the irises that we do grow it is perhaps the Iris ensata, or Japanese Iris, that is the most elegant, dramatic or indeed breath taking.  More refined and less conspicuous than the germanica’s these Beardless Irises produce huge orchid like flowers that are a joy to behold.

First introduced into cultivation over 500 years ago in Japan, they continue to be highly prized and valued there, where they are known as ‘Hanashobu’.

Easily grown, iris ensata perform best in full sun or part shade in humus rich medium to wet soils. They will grow very successfully in ordinary garden soils or perennial borders as long as they are given adequate moisture, especially in their growing season and until late August.

However it is in damp soils that they perform best and they are perfect candidates for water gardens or along pools or streams.  They thrive in standing water up to 15cms deep during their growing season but they do not like to be left in wet conditions (or standing in water) over the winter months.

Flowering from early to midsummer, the ensata’s are the last of the irises to bloom, usually about two weeks after the I. sibirica’s and three weeks after the Tall Bearded or Germanica’s.  There are also early, mid and late season varieties, the late ones starting to bloom at the same time as the early flowering daylilies.  As such they are an ideal plant for that ‘mid season drop in the garden’.

The flowers are large, incredibly attractive and some reach up to 25cm across. They are broader and more flattened than those of the more common irises and may be single, double or peony flowered and come in an array of gorgeous colours, blues, lavenders, violet reds, pink and white and mixes of all these colours too!

Ensata’s tend to be tall plants, often, and in ideal conditions, reaching 90-120cm in height.  As with many other families of plants,  once the breeders got their hands on them, they were ‘encouraged’ to be more productive and floriferous, and once they were introduced to the America’s, they became intensely hybridised!  However, it is still difficult to find a good selection of varieties in Irish or UK nurseries.

Propagation is best done after flowering in the late summer or early autumn when the rhizomes are easily prised apart and it should be done every 3-5 years on mature clumps to promote vigour.  However it must be remembered that iris ensata’s are ‘hungry feeders’ and respond well to a balanced (12.12.12 is ideal) fertiliser just before and after blooming.

Like many other herbaceous perennials a little work on the part of the gardener will ensure a much happier and productive plant over the years.  I am sure that you will enjoy growing them as much as we do!

Of all the plants we grow in the garden, the tall bearded Iris must be amongst the most dramatic.  Long, upright, branched stems emerge from a dense clump of attractive grey-green, sword-like leaves.  One of the most commonly grown forms of the tall bearded Iris species is Iris Germanica, which can be seen throughout these isles.

Over the last 100 years or so, many thousands of new cultivars have been raised and introduced by Iris enthusiasts in the UK, France and the USA.

Many enthusiasts see the early 1960’s as the watershed years when the older, simpler forms started to be replaced by newer cultivars with their unusually large, strongly coloured and very ruffled flowers.  That said one of the most popular varieties is still I. ‘Jane Phillips’ AGM, which was first introduced in 1949.  ‘Jane’ has large pale blue flowers, scented, that blend well into ‘cottage style’ gardens.  The blooms are so large that they tend to bunch together on the stem as they open.  Quite spectacular – but “quietly so” too.

In the 1970’s flowers with frilled and ruffled petals became popular with Iris breeders.  The ruffles help the blooms to withstand poor weather, particularly useful in our climate!

Colour and scent – although the scent can sometimes be very faint – are two of the Irises most outstanding characteristics and blooms can range from white to almost black, blue through purple to pink and yellow through orange to brown – and all combinations in between.

Iris ‘Black Tie Affair’ is one of the blackest Irises although its flowers are smaller than others, and Iris ‘Dusky Challenger’ is still one of the most popular varieties with large, silky, very dark blue flowers that are chocolate scented.

Flowering in June, Iris germanica should be grown in a well-drained, sunny position, where the soil is not too acid.  The rhizome needs to be exposed to the heat of the sun, if they are to regularly flower year on year.  Plants that have grown large and whose leaves block the sun getting to the rhizome should be divided between August and October.  September is ideal as the soil is still damp and warm.  Plant the rhizome at soil level and cut the leaves back to hand length to prevent root rock.  It is advisable to cut the leaves at an angle – sloping away from the rhizome.

As published in the RHSI Journal magazine in May 2018.  Copyright: Susan Miriam Harford, Camolin Potting Shed.

Three Gates Nursery owned by Christoper White has become the first Irish Nursery to be awarded a medal by the UK's National Dahlia Society for the best performing cultivar in their 2018 Trials. The dahlia was named in honour of Christopher's mother Aggie.

Three Gates Nursery owned by Christoper White has become the first Irish Nursery to be awarded a Gold Certificate of Exhibition Merit by the UK's National Dahlia Society. The dahlia was named in honour of Christopher's mother Aggie.